A fire alarm system consists of one F. A., panel which detects the entire state of the system glass enclosed switches called manual call point (M. C. P. S), and audio alarm here in for pounding in alarm, public addressing speakers, a set of battery and the carding which connects all these components to the panel. The amplifier for the P. A. system is housed in the panel/the system described below is a manual fire alarm system. In an automatic Fire Alarm System the will be fire detectors in addition to the aforementioned components. These components are of great importance in fire alarm system.

Power supply to the system is 24 VDC. This is derived from single phases, 2SOV, 50 Hz AC by means of a rectifier. A backup battery of 24 V within automatic charge over switch is provided to ensure the uninterrupted operation of the system, in the event of a power failure during fire. In a manual system, the glass enclosure of the MCP has to be broken by means of the hammer provided along with it, thereby closing the circuit, which activates heaters of the corresponding zone through the panel. An alternating sound indicating fire can be heard now.

This warns the fire condition automatically and transforms it into electrical signals. This is signal activated activate by hooters of a particular zone where the fire has occurred. The MCP’s can also be used the system manually, if so desired. The P. A system can be used by the fire force personnel to guide the inmates during rescue operation.

It indicates that the fuse is blown.

It is a capsuletypefuserated3 Amps. When the fuse blown the BLOWN FUSE indicator will light us In this condition the panel will not work.

It is red LED indicator for BATTERY CHARGINGFUSE blow. When the red lamp glows check the CHG Fuse and replace it.

It is a capsule typefuserated3 Amps. When the fuse is blown the BLOWN FUSE INDICATOR will light up.

It is a battery low indicator. When the battery is below the average charge the indicator will light up.

Then check the battery meter and check the CHG. Fuse then keep the Trickle/Boos switch to the Boost position for emergency charging. When battery gets enough charge keep the switch in Trickle position.

It is a red LED indicator. When the system is on the Indicator will light up.

It has the following functions- Zone cards.

It is a push switch. This switch is for testing the open LED indicator and its circuits in the zone cards for testing the ‘open’, push the open push switch in the function card simultaneously the open LED indicator will light up (in the zone card) and also a Buzzer will sound. This test shows the healthiness of the ‘Open’, detection circuits in the particular zone cards.

It is a push switch. In Fire Short and open condition the panel will give buzzed sound. Tn step this, push the accept switch. In the fire condition the Hooter will sound continuously. To stop this use Hooter Off switch.

It is a push switch. In the fire on other fault condition after rectifying the complaint if any, then push the ‘Reset switch Zone Cards: It is plug in type P. C. B. module for easy maintenance, It’s Fire Detectors circuit number will very according to the number of zones. It has got the following functions:

This is two parallel red LED indicators. In fire condition these two LED indicators will light up also the buzzer and hooter will sound.

This is the LED indicator for short circuit in detector cabling if there is any short in detector wiring. Then the LED will light up and the buzzer will sound.

This is LED indicator for open circuit in detector cabling. If there is any open circuit in detector wiring, then the LED will light up and the buzzer will sound. Isolate: This is a push on and pushes off switch. In off position a red LED indicator will High up. We can switch off a particular zone for maintenance purpose without disturbing other zones.

If the atom is subjected to radiation from a radioactive source ns electrons become detached. As a result the atom becomes Ionization Type Smoke Detector positively charged (t. e, it has more electrons than protons). These ‘new atoms are called ‘ions‘ and the process that created them is called ‘ionization’. If the atoms of air in a container are subjected to radiation, ionization will take place in this way, and the ions will move about haphazardly.

While the ionization detector responds to the invisible products of combustion the optical detector, as its name implies, react to the visible products of combustion, the particles of Carbon an? Other chemicals which give smoke its characteristic appearance. Art amount of light falling on the photo-electric cell, which is the critical factor in the operation of the optical detector, Some optical detectors are designed so that, in a fire situation MORE light is thrown on to the photo- electric cell. These are called the ‘light-scatter type’. Others are designed so that LESS light is thrown on to the photo-electric cell. These are called ‘obscuration‘ type. 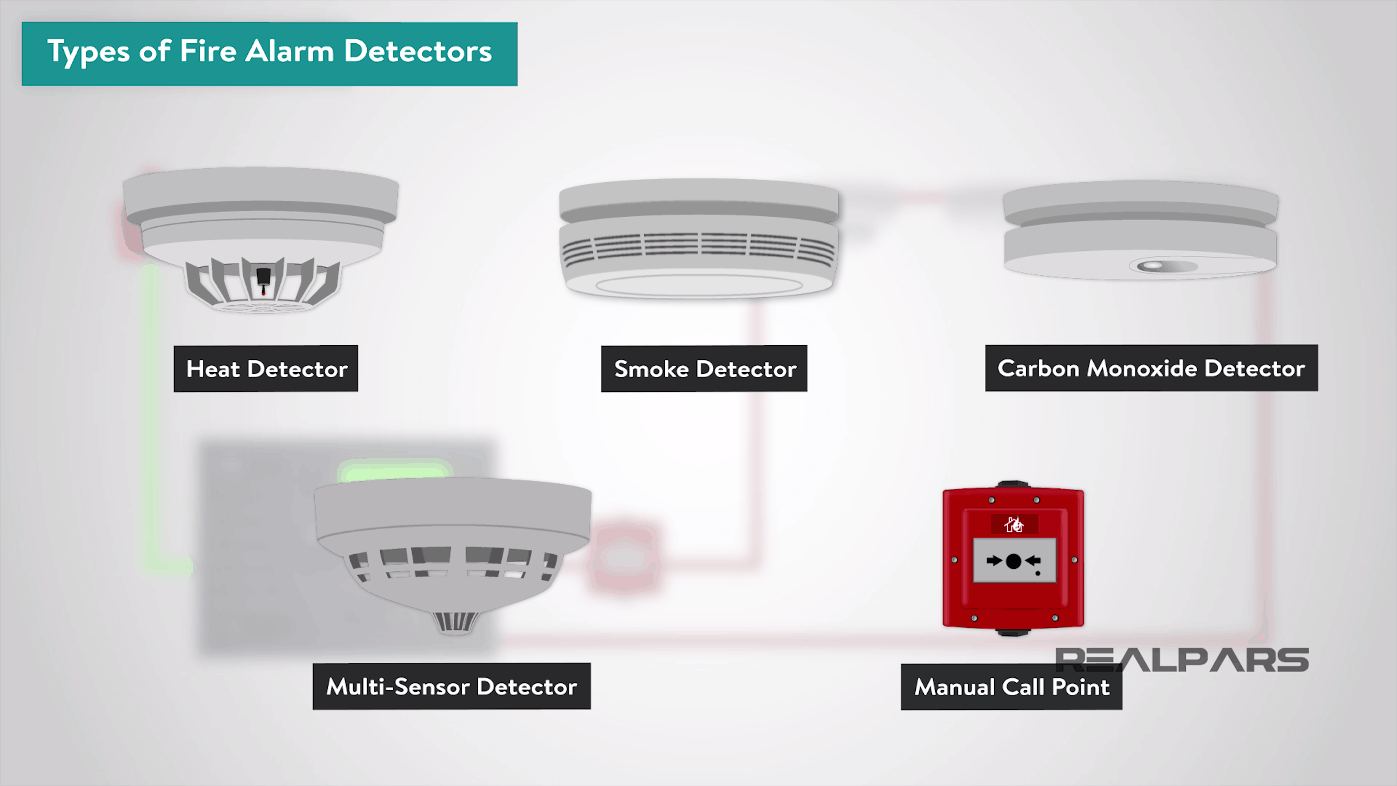 Success in controlling fire lies in its early detection. With the passage of each moment the fire spreads progressively and within a few minutes it turns violent. Fire detection systems are designed to detect fire at the earliest practicable moment so that appropriate actions can be taken for its control.

These fall into two important categories:

Mainly heat detectors are of two types. Which operate at fixed temperature.

Which operate when the rate of rise in temperature of the surrounding air reaches a set limit.

A sealed chamber when subjected to heat expands and pushes a flexible diaphragm to make an electrical contact complete for the alarm.

There are three types of smoke detectors

A beam of light is arranged to fall on a photoelectric cell and if the atmosphere between the light source and the cell is clear, the balance of the electric circuit is not disturbed.

When smoke passes between the source of light and the photocell, the intensity of light falling the photocell is reduced. This change in the electric output is used to operate an alarm at a level.

When a beam of light extend across a transparent medium e. g. , air, its intensity is reduced by absorption and partially by scattering. Scattering takes place due to suspended particles such as dust, liquid particles or smoke.

If the atom is subjected to radiation from a radioactive source some electrons become detached. As a result the atom becomes positively charged. Such charged atoms are called “Ions” and the process that created them is called “Ionization”.

In addition to light, fires generate infrared and ultra violet radiations which ate less affected by Sensor, the presence of flames can be detected in spite of the smoke generated. The signal from the photoelectric cell with infrared filters or an ultraviolet sensor can be arranged to trigger the smoke than normal white light. By employing a photo electric cell with inferred filters or an ultraviolet alarm.

These devices suffer from the disadvantage that they will react to infrared or ultraviolet radiations from other sources and hence are prone to spurious alarms. This disadvantage is overcome in a combined smoke and heat detecting system in which a modulated infrared beam is transmitted across the area to be protected. Smoke and heat haze interfere with the, beam and this is detected in the receiving unit which initiates the alarm.

Iconic One Theme | Powered by Wordpress